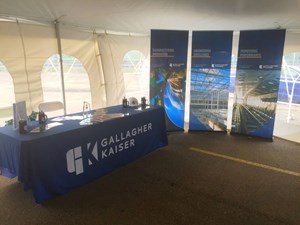 Gallagher-Kaiser Platinum Sponsor at “500 Million Thanks”

FLINT, August 11, 2015 – Gallagher-Kaiser Corporation (GK) joined General Motors and the UAW Local 598 at the GM Flint Assembly Plant on Tuesday, August 11th to celebrate the 500 Millionth GM branded vehicle produced. The event was open to the public and provided numerous actives such as a GM Ride and Drive and Plant Tours. Part of GK’s sponsorship also went towards the United Way of Genesee County.

Down the road from the Assembly Plant is the site of the new GM Flint Paint Shop that General Motors awarded construction to Gallagher-Kaiser in 2014.

The new Flint facility is slated to be completed in 2016. The project includes a new building and all new process equipment.

"It was a pleasure participating in the GM Open House event, it gave GK an opportunity to meet and present information on the new GM “State of the Art Paint Shop” currently under construction in Flint. With the expansion of the facility it brings jobs, hope and a new life to the city," said Cindy Leppek, GK Buyer. "This event brought the community together and gave them a rare opportunity to tour the existing plant and see firsthand what it takes to build a GM vehicle. You could feel the excitement and pure appreciativeness the community has for the GM Flint Assembly Plant Team for all that they have done and all that they continue to do for the surrounding communities and their families."