GK/UPI HEADQUARTERS AWARDED "MOST FESTIVE BUSINESS" BY CITY OF TROY On Monday, December 16, 2019 the GK headquarters was recognized by the City of Troy as the"Most Festive Business" for the holiday lights display! The Troy campus also houses GK subsidiary, Universal Piping Industries (UPI).

GK joined Troy City Council and members of the community to recognize businesses and homes in the community that go above and beyond with their holiday displays.

"Santa's Sleigh is a Chevrolet"

Over the years, we have received countless kind messages from people in the community expressing their admiration and appreciation for the display. For many, we’re told it “lights up” their long commute.

Although (we believe) it gets even better every year, 2019 is most certainly our best yet.

With the help of GM, we added something else special this year.

At 22’ tall stands a platform wrapped in a banner (“Santa’s Sleigh is a Chevrolet”), with a red 2019 Chevrolet Silverado 2500 HD lit up atop it. Painted at GM Flint, the vehicle is an impressive representation of the successful new paint shop we completed there in 2014. What’s more, it can also be a reminder of what so many of us have to be grateful for. 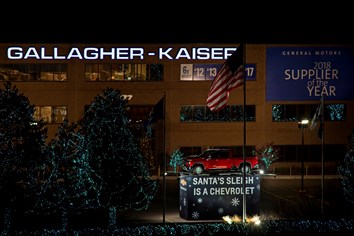 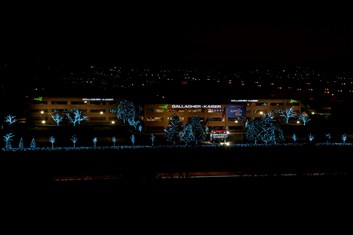