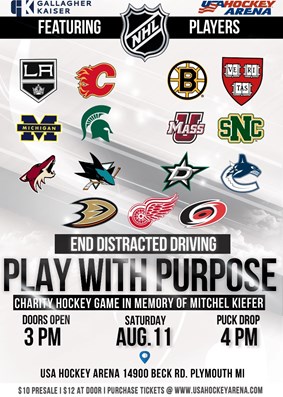 The Play With Purpose Charity Hockey Game was created to honor the memory of the late Mitchel Kiefer and to increase the awareness of the consequences of distracted driving. Mitchel was killed by a distracted driver on September 19, 2016, while driving to Michigan State University after a weekend at home. Mitchel played his last hockey game in August of 2016, when he joined the summer interns of Gallagher-Kaiser (GK), in an employee vs. intern game. The following year, the interns decided to dedicate the event to Mitchel, creating the annual Play With Purpose game.

This year, GK’s memorial game will be presented by hockey has heart.

“We are honored to be a part of such a special event,” said Bob Kaiser, owner and CEO of Gallagher-Kaiser. “We look forward to joining USA Hockey Arena and the other sponsors to put together a memorable event that helps tell Mitchel’s story, while raising funds to increase awareness of the dangers of distracted driving.”

In addition to the charity game, the event will feature a 50/50 raffle, silent auction, live music performances and special guest appearances.

“Our entire family is humbled for the amazing platform that this event will bring to Mitchel’s memory and our mission to end distracted driving,” said Steve Kiefer, Mitchel’s father and founder and Chairman of the Board for the Kiefer Foundation. “We are so happy to see the progress that our relationship with USA Hockey Arena has taken since the dedication of the rink in December and look forward to continuing our relationship to positively impact the lives of young people.”

Part of the Play With Purpose Team sat down with Detroit's Channel 7 News to talk about the game! 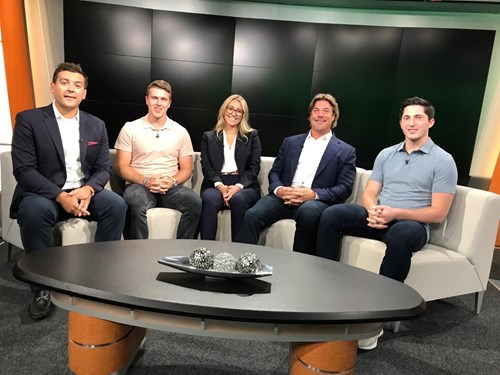