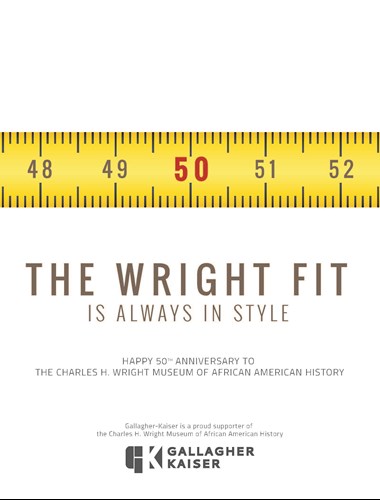 DETROIT, October 10, 2015 – Gallagher-Kaiser (GK) served as a Fashionably Bronzed Sponsor for the 2015 Wright Gala at the Detroit Marriot at the Renaissance Center, Saturday, October 10th, 2015.

The Gala was put on by the Charles H. Wright Museum of African American History, in celebration of the Museum’s 50th anniversary. The sold out event included a cocktail reception, seated dinner, live auction, performances and dancing. Creative black tie was the requested attire for the evening and many guests wore items such as patterned tuxedo pants, colorful gowns and much more.

“It was a pleasure to be part of a first class celebration event that raised money for a Detroit landmark Institution and a good time was had by all,” said GK Buyer, Larry Fegert.

The funds raised through the event will hopefully help to keep the Wright Museum up and running for another fifty years!