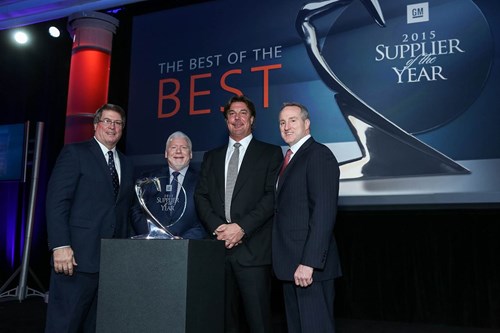 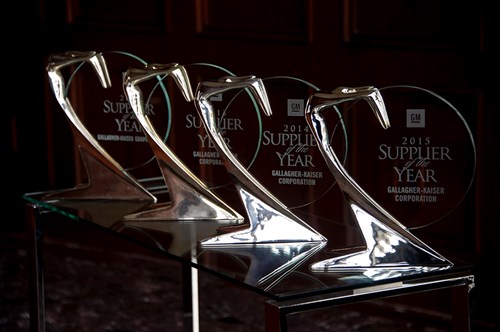 GM recognized 110 of its best suppliers from 17 countries who have consistently exceeded GM’s expectations, created outstanding value, or brought new innovations to the company. The announcement represented the most suppliers GM has recognized since debuting the Supplier of the Year event in 1992. This is the 4th time Gallagher-Kaiser has received the award.

“We are focused on building positive supplier relationships, bringing new, customer-centric innovations to GM, and being the OEM of choice among suppliers,” said Steve Kiefer, GM vice president, Global Purchasing and Supply Chain. “The companies we recognize tonight not only have brought innovation, they delivered it with the quality our customers deserve.”

GM’s 2015 supplier recognition represents a nearly 40 percent increase in the number of suppliers honored compared to 79 recipients in 2014. More than half of the suppliers are repeat winners from 2014.

Winning suppliers were chosen by a global team of GM purchasing, engineering, quality, manufacturing, and logistics executives and selected based on performance criteria in Product Purchasing, Indirect Purchasing, Customer Care and Aftersales, and Logistics.

“We are incredibly grateful to be recognized as one of the best of the best, for the fourth consecutive year, but also for the GK and GM team whose efforts made this success possible.This award symbolizes the uniquely collaborative culture we are able to create and the partnership that stems from it. For decades, we have strived to deliver exceptional service to General Motors and we will continue to dedicate ourselves to not only maintaining this level of service, but to improve upon it in the years to follow,” said Gallagher-Kaiser CEO, Bob Kaiser.

On the heels of completing the new 1.4 million square foot GM Flint Assembly Paint Shop, GK acknowledges this award as a true testament of their partnership with General Motors.

Founded in 1952, Gallagher-Kaiser Corporation is a privately owned, Michigan based turn-key supplier of Paint Finishing Systems, Commercial HVAC and Mechanical Automotive Systems. More information can be found at www.gkcorp.com.