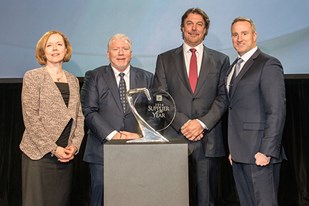 DETROIT, March 6, 2015 – Gallagher-Kaiser Corporation (GK), a turn-key supplier of Paint Finishing Systems, has been honored with a General Motors 2014 Supplier of the Year Award. GK was recognized along with the other top performing suppliers during the automaker’s 23rd annual Supplier of the Year awards ceremony held at Detroit’s Cobo Center March 5, 2015.

This is the third consecutive year that Gallagher-Kaiser has received this award.

“These companies are the best-of-the-best suppliers, and deserving of special recognition for their outstanding contributions,” said Steve Kiefer, GM vice president, Global Purchasing and Supply Chain. “We need them to continue to bring us their most innovative technologies and highest quality services and work, and we will continue to win together for the benefit of our customers.”

Gallagher-Kaiser is currently completing the General Motors Fairfax Assembly Plant Paint Shop. The new Paint Finishing System will establish the Fairfax Facility as the most technologically advanced Paint Shop in the world today. The substantial technological upgrades include, Hyper-Throw E-Coat, Radiant Tube Ovens, as well as, Thin Film Technology. The new System will considerably lower the plant’s energy use, reduce the waste stream and lower the carbon footprint by an estimated 20%.

In addition to GM Fairfax, Gallagher-Kaiser is constructing a new Paint Finishing Facility at the GM Flint Assembly Plant mirroring the advanced technologies installed at Fairfax.

“It’s an honor to be recognized by General Motors with this award, as it’s truly a testament to the hard work and dedication of our employees and partners,” said Robert Kaiser, CEO of Gallagher-Kaiser. “We’re especially proud to say that we’ve achieved this accolade for three years in a row, demonstrating our continuous dedication to deliver the best products and services possible to our customers.”

General Motors Co. (NYSE:GM, TSX: GMM) and its partners produce vehicles in 30 countries, and the company has leadership positions in the world's largest and fastest-growing automotive markets. GM, its subsidiaries and joint venture entities sell vehicles under the Chevrolet, Cadillac, Baojun, Buick, GMC, Holden, Jiefang, Opel, Vauxhall and Wuling brands. More information on the company and its subsidiaries, including OnStar, a global leader in vehicle safety, security and information services, can be found at http://www.gm.com.