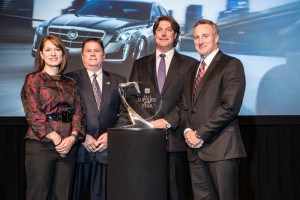 Detroit, Michigan, March 13, 2014 – General Motors recognized Gallagher-Kaiser Corporation as a top global automotive supplier on Wednesday, March 12, 2014 during the 22nd annual Supplier of the Year awards ceremony.  The event was held at the Cobo Center in Detroit.

This is the second consecutive year that Gallagher-Kaiser has been honored with this award helping to commemorate the successful launches of General Motors projects including Arlington, Bowling Green, Detroit-Hamtramck, Flint, Lansing Delta Township, Spring Hill and Wentzville assembly plants.

Only 68 of GM’s approximately 22,000 suppliers around the world received the Supplier of the Year award for 2013. Winners are recognized for delivering innovative technology, superior quality, timely crisis management and competitive, total-enterprise cost solutions. The Supplier of the Year award winners are selected by a team of GM purchasing, engineering, quality, manufacturing and logistics executives.

With the ongoing new paint shop construction of GM Fairfax assembly plant, the groundbreaking of the new GM Flint paint shop held March, 3, 2014 and the recent award ceremony, this is a very busy and exciting time for Gallagher-Kaiser and their ongoing commitment to General Motors.

CEO, Robert Kaiser of Gallagher-Kaiser stated, “We want to thank all of our employees, partners, and suppliers who have helped us achieve this prestigious honor once again. We share this award with you and appreciate your continued support”.